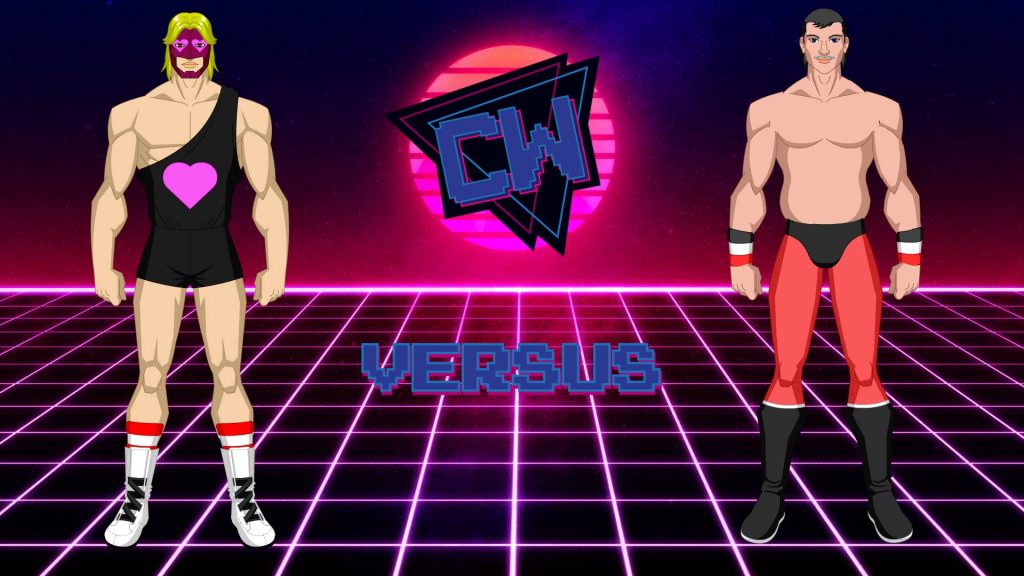 We move from the video package to ringside where we can see that Shooter Landell is being introduced and already in his corner. The official Spencer Fuller moves in to check his boots for weapons as the next theme song hits.

“Hello It’s Me” by Todd Rundgren begins to play over the arenas sound system. The crowd begins to boo as Undercover Lover comes in his pink robe and dances seductively down the aisle. He stops at one particular lady and gyrates his hips a bit. When she looks disgusted he waves her off and moves towards the ring.

Robbins: and his opponent, weighing in at 225 Lbs. Hailing from “The City of Love!” New Orleans, Louisiana! This is Unde….

The Undercover Lover stops him. After a quick whisper in the ear, Robbins gives it another go.

Robbins: This is…”Mr Hide Your Wives and Daughters”…. UNDERCOVER LOVER!

He comes out of his corner with his arms raised, but it’s boos he receives back from the crowd. Paying the fans in the Gund Arena no mind, Undercover Lover smiles and waves. The official checks him over and calls for the bell.

Moss: And we are underway folks here at IN YOUR HAUNTED HOUSE! Undercover Lover vs the mysterious Shooter Landell. What do you know about this guy Thunderbird?

Howley: He’s quiet, that’s for sure!

The bell rings and Shooter walks towards The Undercover Lover, challenging him to charge. Lover takes the bait and runs towards Landell who attempts a quick clothesline. Lover ducks under it and hits the ropes. When he comes back he jumps into the air and catches Shooter with a running crossbody that drives both men to the mat. Spencer Fuller moves in for the pin attempt.

Shooter Landell kicks out and is quickly back up to his feet.

Moss: Almost got him with the lightning quick pin there, but Landell to his credit, really showed up on time to kick out. Both men are up now, It looks like the Lover was slightly quicker, he picks him up for a body sla… no it’s a shoulder breaker!

Howley: My goodness, that’s gotta hurt, I bet he separated the rotator cuff on that one!

Undercover Lover pulls Landell back up to his feet and applies a hammerlock to him. The Lover then reels back and blasts a fist right into the heart of Shooter. Landell crumples to the mat lifeless with the blow. Lover jumps up in the air for a quick splash pin.

Spencer Fuller calls for the bell and The Undercover Lover jumps for joy.

Robbins: Ladies and Gentlemen your winner… THE UNDERCOVER LOVER!

He gyrates in the center of the ring, causing the referee not even want to raise his arm in victory. Undercover Lover pays him no mind and starts pointing out to the ladies in the crowd, seeing which one wants to leave with him tonight. It doesn’t seem many are interested in his proposal.

Moss: Decisive win for The Undercover Lover! He’s putting his mark on Classic Wrestling with wins like that one!

Howley: I hear those marks come out with a little Oxi Clean.

The Todd Rundgren hit plays throughout the arena as the Undercover Lover dances his way to the back.