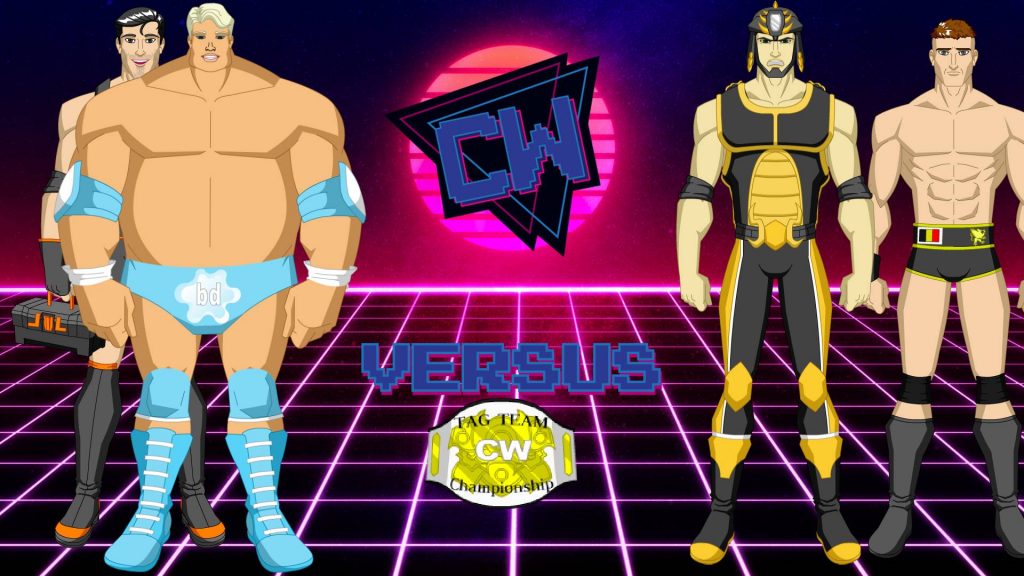 Moss: We’re back and ready to return to action… IN YOUR HAUNTED HOUSE!

Howley: Knowing who we’ve got coming up next, I’m sure this match will feature some tricks, and hopefully it’ll end with a treat! Like, oh I don’t know, legitimate champions?

Robbins: The following match is one fall, and for the Classic Tag Team Championship… Making their way to the ring, accompanied by Eddie Dantie… weighing in at a combined 532 pounds… the challengers; FOREIGN LEGION!

Eddie Dante steps out from the curtain behind his talent, sporting a sinister smile across his face as he soaks in the boos from the crowd. In true Foreign Legion fashion, Mushigihara and Leon break into a sprint down the ramp, sliding into the ring and begin taunting the crowd to an increased level of booing.

Moss: Doesn’t sound like the crowd reflects your sentiment there, Thunderbird!

“You’re the Best” by Joe Esposito fills the Gund arena, bringing everyone in the Cleveland crowd to their feet. First to step out is, as expected, “Beautiful” Bobby Dean in all his glory, smiling from ear to ear in his baby blue robe with both of the title belts wrapped around his large waist. He stands at the top of the ramp, arms raised high while slowly rotating 360 degrees for all to soak in the moment. Meanwhile, Lunchbox Larry quietly makes his way from behind the curtain as well, waving timidly back and forth between both sides of the building with one hand, lunchbox in the other.

Robbins: And their opponents… weighing a combined 646 and a half pounds… the reigning Classic Tag Team Champions… BEE-DEE-ESS-EMMMMMM!!!

The crowd gives an extra pop at the announcement of their Tag champs as the odd couple makes their way to the ring and Joe Howley’s gray hair count increases.

Howley: I don’t understand what this generation of fans can possibly see in these two.

Bobby stops just before the ring and waits impatiently, looking at Larry and pointing to his wrist. Lunchbox begrudgingly approaches his partner, then drops to a knee and holds both hands together, palms up. Dean steps on the hands, using them as a step up, and rolls into the ring somehow managing to fit under the bottom rope… after Larry quickly popped up to his feet and lifted it to the height of the middle rope.

Howley: If they’re going for horror movie vibes, they nailed it. I can’t even watch this, Moss.

Larry slides into the ring after Bob and jumps onto the nearest turnbuckle, raising his lunchbox in the air to get another pop from the crowd. Bobby reluctantly removes the two Tag Titles from his person and hands them over to Felipe Chicoda, then he spins around in the middle of the ring slowly, and removes his robe with a cheeky smile.

Howley: Disqualify him already! This can’t be legal.

The robeless Dean reveals his recently acquired ‘I Dream of Genie’ two piece. After taking care of the belts, Chicoda turns around and looks aghast at the sight. He starts shaking his head, pointing at Dean, and anyone who can read lips can see him telling Bobby, “Take that top off! No costumes!”

Dean, red faced in anger, points over to Mushigihara and asks, “What about that?!”

Moss: Looks like Bobby Dean is trying to get Filipe to consider making Mushigihara remove his ring attire. An interesting tactic before the bell even rings. Maybe he’s trying to get in Mushi’s head?

Chicoda waves Bobby off, as the wrestler takes off the top piece of his outfit while pouting, and directs him back to his corner. Larry gets ready to take the lead in the match, as usual, but Bobby shakes his head and tells his partner to step out onto the apron.

Howley: What in the world? Bobby wants to wrestle?!

Dean turns around, staring at Mushigihara and Leon Van Zandt, egging them both on. Leon steps forward, looking fed up with Dean’s shenanigans, but Mushigihara grabs his shoulder. Leon snaps around, clearly confused. Mushi mouths “OSU” in a determined tone, and LVZ nods his head then steps out onto the apon.

Felipe finally calls for the bell.

Moss: Mushigihara looking to use his frustration to his benefit against Bobby Dean early on here as he charges forward toward the defending champ!

Just as Mushi meets Dean in the middle of the ring, he rears his right hand back for a haymaker-

Howley: Sock it to him!

Bobby, waving his hands frantically, causes Mushi to pause. Even those in the back seats can hear Dean plead, “Not the face!”

Moss: Maybe he didn’t want to wrestle, after all, T-bird?

Howley: This is a disgrace.

Mushigihara shrugs then looks back to his tag partner, who’s arms are in the air in disbelief that Mushi stopped at his opponent’s request. Then a smirk grows out of the corner of Mushi’s face, he shoots LVZ a confident wink, and in one swift motion he turns back toward Bobby and delivers that haymaker right into his gigantic gut.

Moss: What in the?

Howley: Did Bobby Dean just puke poop out of his mouth onto Mushigihara’s face?!?

Moss: I’m pretty sure that was chocolate mist, Thunderbird! But I guess you never know with Bobby Dean!

Mushigihara doubles over, grabbing his face trying to get the brown substance out of his eyes. Eddie Dante shouts at Felipe demanding a disqualification, but Chicoda shrugs, uncharacteristically unsure of how to rule the action.

Howley: How in the world is that NOT illegal, Moss?!

Moss: I guess you could argue that Bob was just finishing a pre-match Halloween treat? It’s not like he spat it out intentionally…

Bobby grabs the back of Mushi’s head as his opponent still struggles to see, and runs his pointer finger of his free hand up Mushi’s cheek.

Moss: Looks like that might be the case as Bob is clearly more concerned about getting some of his tasty treat back.

Just as Dean licks his chocolate covered finger, Mushigihara hooks his right leg and lifts, sending the big man crashing to the mat on his back. The Emperor snaps around and dives toward his team’s corner, slapping an outreached hand of Leon Van Zandt.

Moss: Now that’s pro level ring awareness right there, Thunderbird, as Mushigihara takes his opportunity to get out of the action.

Eddie Dante grabs a towel from ringside and throws it to Mushi, who promptly wipes his face clean, while LVZ charges into the ring and grabs the foot of an army crawling Bobby Dean who’s trying to make it close enough to his corner to tag in Lunchbox. Just as Leon grabs a baby blue boot, he jumps back startled.

Moss: I think… I think Bobby just hissed at Leon Van Zandt and it caught The Professional off guard!

Howley: Gee, I can’t imagine why. Hissing like an evil cat is such a common counter in wrestling these days…

Moss: Dean makes the tag! Lunchbox Larry is officially getting into the action!

Howley: Yay, we’ll get to call some actual wrestling now!

Bobby rolls out of the ring, looking exhausted despite the lack of any real action, and Eddie Dante greets him ringside, shouting incessantly at the “cheating scum.”

After trading a number of hard right hands, LVZ ducks under Larry’s next one and delivers a strong foot stomp down onto one of Lunchbox’s boots.

Moss: Great display of anticipation and quickness there by Leon Van Zant. Larry’s doubled over after that footstomp! OH WHAT AN UPPERCUT! Larry’s reeling back from that one, T-bird!

LVZ reaches forward, grabbing Larry, and whips his opponent back into the Foreign Legion’s corner. Leon charges in a full sprint and leaps-

Howley: And there’s the tag to Mushigihara! He’s gotta be looking for revenge now that he can see again!

LVZ pulls Larry from the turnbuckles and hooks his arms behind his back, allowing Mushi to land a barrage of rights and lefts to his midsection. Mushigahara turns Larry around, and slams him down almost on his neck.

Moss: My goodness! The Emperor Suplex!

Bobby Dean steps halfway through the ropes and sees LVZ waiting on him. He hesitates at Mushigahara goes for the cover.

The bell rings and Harold Robbins comes in on queue.

Moss: Bobby Dean had a chance to try to break up the pin, but he hesitated!

Howley: He had a world class shooter staring him down!

Moss: I thought he cared more about the Titles than that!

As The Foreign Legion gets out of the ring with the Championships, Bobby Dean gets in to help Larry up. Lunchbox is holding his head and confused about what happened. Bobby Deans telling Larry he got socked and so he didn’t see it either. Using his hands to signal what happened. Putting on quite a show in the process.

Outside the ring Eddie Dante comes over to his men with a smile on his face. He holds his arms out ready to embrace, LVZ and Mushi stare at one another before going in for it. Dante grabs the belts from both men and embraces them instead. He holds the championships high into the air before turning and walking away from The Foreign Legion members.

Howley: Of course he is, HE DID IT!