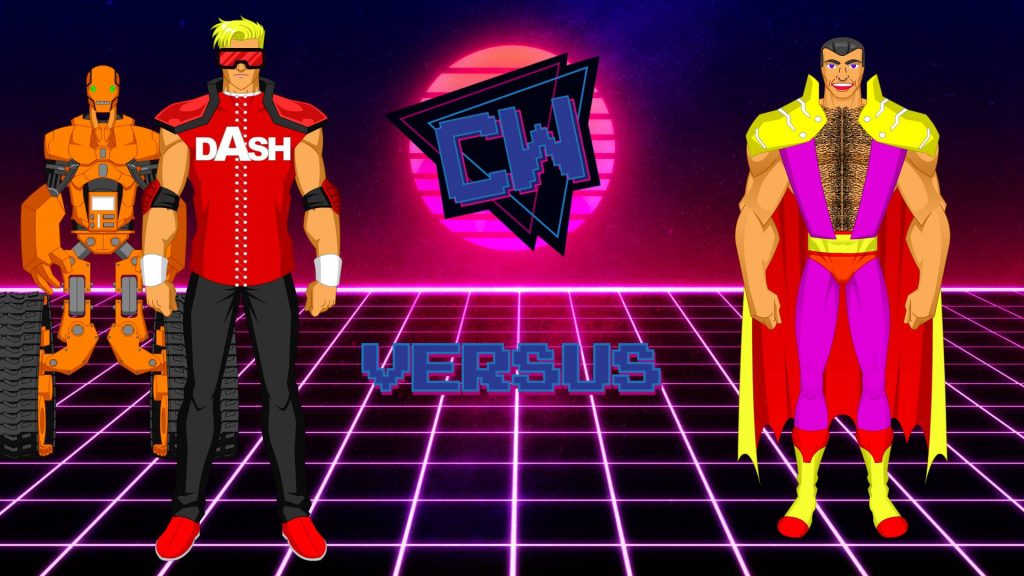 Moss: Up next folks we have a good ole grudge match on our hands!

Howley: I’m still dumbfounded that Dash Dackson actually had the fortitude to use that animatronic hand..

Moss: Fortitude might be a strong word, Joel. If anything, a lot of people have been calling it a cowardly act. Especially the man he’s facing tonight, Harry Chest.

Howley: I’m sure he is. Harry Chest is so blinded by his sense of good that he forgets that sometimes it’s all about finding a way to win.

Moss: Most people wouldn’t agree with such a “hot take”, but that’s the beauty of opinions, of course. Folks, let’s head down to Harold!

The fans in the Gund Arena all buzz with anticipation as the pre-match bell rings. Harold Robbins is on the stick right after.

Robbins: The following contest is scheduled for one fall!

Savior of the Universe!

He’ll save every one of us!

Despite cheering the popular theme song, the arena quickly fills with boos as Dash Dackson begins making his way out to the ring with HELLO WORLD at his side, running along its continuous track.

Robbins: Making his way to the ring first, from The Future… weighing in at 210lbs… he is The Future Fighter… DASH… DACKSON!

They both stop and take a moment to look around at the spookiness of the In Your Haunted House decorations and general setup.

Moss: Is it me or does Dash Dackson look a little bit… unhinged tonight? And for that matter, does HELLO WORLD seem inexplicably creepier?

Howley: You’re not wrong about either. HELLO WORLD almost seems like an emotionless husk. Like, a metal version of Michael Myers.

Dash and HELLO WORLD make their way down to the ringside area. Dash hops up onto the apron while HELLO WORLD’s propulsion system maintains a forward route. It’s at this moment when the opening chords to Bon Jovi’s “Let it Rock” pulsates throughout the crowd, sending them into a frenzy!

Moss: Would you listen to that! This crowd is going bananas!

Robbins: Making his way to the ring next, from Swan River, Manitoba… weighing in at 245lbs… he is The Every Dad… HARRY… CHEST!

Several moments go by and we’re about a minute into the Bon Jovi classic when Harry Chest bursts through the door coming from the backstage area. The fans are all singing along in unison, much to the delight of Classic’s Every Dad!

You can’t stop a fire burning out of control!

With the night you’re on the loose

You got to let it rock!

Howley: Okay, despite my feelings about the annoying “Every Dad”, this is one of my favorite songs ever. I cannot tell a lie.

Moss: Well, that’s the first one you’ve admitted to, anyway!

With Harry Chest nearly to the ring, HELLO WORLD is making its way over to him, stopping Classic Wrestling’s Every Dad right in his tracks (no pun intended)! Pointing at the robot for trying to distract him already, this allows Dash Dackson to sneak behind and nail him with an axe handle smash!

With Harry trying to recover from the stiff attack, Dash guides him to his feet and whips him right into the guard rail! Proud of his newfound viciousness, Dash waves at the fans to a chorus of boos.

Grabbing his arm, Dash whips Harry towards the post, but Harry uses it for redirection by swinging around it, swinging around under the bottom rope! With momentum on his side, Harry flies forward with a clothesline, taking Dash Dackson down on the outside mat!

Moss: Wow! What athleticism to swing around that post and under the ropes! I don’t think I’ve ever seen that before!

Howley: Me neither, Moss. Credit where credit’s due.

Harry brings Dash to his feet and rolls him inside the ring. Following him in, referee Felipe  calls for the bell!

Dash is up to his feet and goes for a right closed-fist, but Harry blocks it and fires back with an overhand knuckle shot! Dash reels back from the counter, and Harry leans in with a second knuckle shot! Dash is backed up into the ropes, and Harry leans in and grabs him by the arm and shoulder. Whipping him into the opposite side, Dash is scooped up on the rebound for a bodyslam and is brought down with thunderous force.

Howley: That one echoed into the future so hard it renamed this place the Rocket Mortgage Fieldhouse!

Moss: What a stupid name for an arena.

Dash is trying to get up, but Harry climbs to the second rope nearest the ramp and flies with his elbow outstretched for a mid-rope elbow drop. Harry hooks a leg and  is there!

Moss: He got more of that than I thought. Close count, there!

Harry lifts Dash into a sitting position where he stands over him. Jumping up, he crashes straight down across the upper back/lower neck region with his inner thigh. Flattening him back down to the mat, Harry makes another cover, this one of the lateral variety.

Howley: Harry showing some aggression in the early going of this.

Moss: You’d be aggressive too if your opponent tried to take you out before the match.

Howley: If my opponent tried to take me out before the match, I’d let him. I’m preferable to  G.D. Ritzy’s.

Harry goes to bring Dash up once again, but is distracted by HELLO WORLD on the outside, shouting random words in his direction.

Having absolutely no idea what HELLO WORLD is talking about, Harry looks at Chicona, who in turn shrugs back at him. This is just enough time for Dash to hit Harry with another axe-handle smash. Harry goes face first into the top turnbuckle, and Dash rolls him up!

Moss: LOOK! His feet are on the ropes!

Howley: I don’t see anything.

Thr– NO!!! Harry manages to kick-out despite Felipe not seeing Dash’s feet on the ropes!

Chicona finally notices the feet on the ropes and begins admonishing Dash Dackson for the attempt. In a moment of complete irony, Harry Chest uses this momentary distraction to his advantage and rolls up Dash!

Chicona is waving off the count, realizing his hand came down for the third erroneously, unable to stop the momentum with how close it was. Confused, Harry Chest is double checking with Chicona about the count, holding up three fingers. Chicona shakes his head and advises it was only two, much to the chagrin of the capacity crowd.

Moss: It is what it is, folks. Sometimes even the most skilled referees in professional wrestling make mistakes. Sometimes, if it’s so darn close, you can’t stop the momentum of your hand!

Howley: I believe that is precisely what she said.

Turning around, Harry catches Dash right in the middle of another axe-handle smash attempt, but ducks and grabs his waist for a go-behind position. Lifting him up for a German-styled suplex, Dash hooks a leg around Harry’s leg thus blocking the attempt. Dash throws an elbow, catching Harry right above the left eye, causing him to reel back and even drop to a knee!

Moss: If Dash had connected with that strange looking suplex, this one would’ve been over.

Howley: Holy smokes! Harry’s lacerated right above the eye! The point of Dash’s elbow may as well have been a fork!

The fans gasp as Harry wipes some of his crimson DNA away to clear his vision, but like a shark smelling chum in the water, Dash Dackson dropkicks him right across the face, sending Harry down onto his buttocks against the bottom turnbuckle. Dash hobbles on his leg for a moment, drawing concern from .

Moss: Harry is in a bad way here, but I think Dash is hurt after landing that dropkick. WAIT! WHAT IS HELLO WORLD DOING?!

Sure enough, Dash’s robot companion/nightmarish-soul-sucking puppeteer is CHOKING Harry Chest behind the Chicota’s back with his creepy, elongated, robot hands and fingers!

Crowley: HELLO WORLD is proving to be the difference maker tonight.

Dash drags the bleeding Harry Chest to the center, who looks to be nearly out of it. Lifting the Every Dad up into a front chancery, Dash Dackson raises his hand, smacks the back of Harry’s upper back and annihilates him with a DDT!

Chicota calls for the bell as the fans in attendance boo. Medical personnel immediately swarm the ring, tending to the laceration above Harry Chest’s eye.

Moss: Dash Dackson gets away with one here after a hard fought match from both competitors. Though, I will say, Harry Chest might’ve had more of a shot without HELLO WORLD interfering on more than a few occasions.

Dash is out of the ring, making his way to the back with HELLO WORLD. Meanwhile, in the ring, Harry Chest is getting to his feet with a Doctor working on his busted eyebrow with some salve and bandages, but Harry Chest pushes away everyone. Frustrated over the loss, Harry Chest looks down at Dash Dackson as everyone chants, “HARRY! HARRY! HARRY!”.

Moss: Something tells me this one’s not over, Joel.